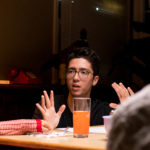 Alexander Edep is an LA-based filmmaker currently studying at Dodge College of Film & Media Arts with a major in Film Production. In love with storytelling since he was a child, Alexander aims to tell engaging, personal stories that also speak on the experiences which we all face in the human condition. His work has premiered in over 20 film festivals and has won several awards such as the LA Film Awards for best Youth Filmmaker as well as a Suncoast Student Emmy. Alexander has also had the opportunity to work with AT&T & Fullscreen to write and direct two episodes of their web-series Greynet. Alexander is currently in pre-production for his thesis film about the Armenian Genocide titled Forget Me Not.