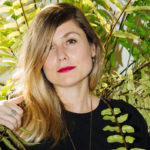 Bevin McNamara is a Los Angeles-based film director with a varied roster of projects from films, television, music videos, web series, to documentaries.
After graduating NYU’s Tisch School of the Arts with a degree in film & TV, Bevin started her film career by working side-by-side with Jonathan Demme for over 10 years.

In 2011, she co-founded the creative collective The Sunset People, directing film and video projects for clients such as Red Bull, NBC Universal, BabyCakes NYC and others, and has directed music videos for Polica, Valley Fever and Velvet Negroni. Bevin recently completed the short film Nacho House and has a television series in development. Clarice Starling from Silence of the Lambs.

You’ve gotta go through some bad ideas to get to the good ones. Tell us one of your bad ideas. How do you get past the bad ones to find

Creativity is messy, uncertain and can be scary because we become vulnerable. I analyze to find the core of the “bad idea” and persistently mold it to a shape that feels good. For instance, when we were in post on The Hoaxing and needing to amplify the monster qualities of the ghost of Mary Meeker, at one point I suggested she turned into a CGI monster – a demon creature. I had seen a few other shorts where this worked for their story. Iteration after iteration just didn’t feel right for The Hoaxing, and for how the movie was shot. So, I reflected on what my instincts are as a filmmaker, and what I’m drawn to. We pared down the effects and relied on syncopated jump cuts to set the eerie mood of Mary. The process helped define the ethos of the film.

Yes, but it’s more of a film-loving community with a heavy emphasis on horror and psychological thrillers.

Deadlines. I am constantly and enthusiastically absorbing information and content, so I need deadlines to help me organize and keep me accountable. I like to get away from my computer and go to a museum where I can witness different forms of storytelling and representation of the human condition. Having a three-year-old has also given me greater insight into the art of anticipation. Tickling or playing hide and seek are direct reflections of what we are trying to achieve with a jump scare or suspense on the screen. Everything informs everything, so the inspiration is all around. And the deadlines force me to compose all of it into something cohesive (hopefully).

This is my ultimate villain dinner party crew: Jack (The Shining): to bring the fun and games Mogwai (Gremlins): for the party favors Carrie (Carrie): for her feminine power Hannibal Lector (Silence of the Lambs): for the banter and appetizers Annie Wilkes (Misery): to nurse our hangovers.

Since we shot The Hoaxing in my art studio, the set was essentially built with my personal belongings and I think that makes the environment relatable and authentic. When building the world of the characters, I try to identify a dozen or so featured objects / props that could summarize their personality and trajectory in life.

Too many! But if I’d have to say, it’s a tie between The Shining and Silence of The Lambs