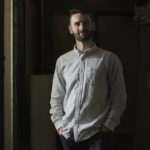 A graduate of Capilano University’s Bachelor of Motion Picture Arts degree program, Brodi has since garnered a wealth of experience in both corporate entertainment and physical production settings in the Vancouver area. Most recently he performed as Production Executive for the prolific Vancouver-based BRON Studios where he worked alongside their VP Production throughout productions such as BOMBSHELL and the Angelina Jolie thriller THOSE WHO WISH ME DEAD. Prior to that, Brodi spent a number of years in the production office space working as a production coordinator & assistant production coordinator on notable shows such as DEADPOOL 2, in addition to productions for various studios like DISNEY, UNIVERSAL STUDIOS & NETFLIX. He is currently focused on continuing to make genre content in his free time with the hopes of affecting the Canadian entertainment landscape.

Maud from Saint Maud. I have a dangerous obsessive streak.

Good ideas can be unearthed through the painful process of revision, but it’s also good to know when to move on – which is an instinctual skill to be developed over time.

Not yet! But I’ll keep trying!

An easy shorthand with crew is to provide reference images from films/artwork across all genres.

I would run out of the apartment ASAP

The cult from Hårga in Midsommar. Power in numbers!

My fears are usually my first place of inspiration