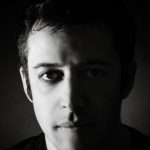 James originally entered the film industry as a visual effects artist, contributing to Oscar & BAFTA winning feature films at the world-renowned VFX house Framestore. This fostered an eye for intricate detail and a lasting drive to
achieve impeccable results. To this day as a Director, he is adept working with live-action and CGI, often blending the two extensively.

In the grand tradition of creatives with a name that begins with J (Abrams, Rowling, Tolkien), James has chosen a pretentious moniker using his initials, in a futile attempt to make him sound important on the end credits.

Adam Pearson’s character from Under The Skin. If Scarlett Johansson tried to lure me into her van I’d probably fall for it too.

In 2010, one of my first (attempted) short films was stupidly ambitious. It featured a huge homemade time machine which the protagonist had built from scrap in their living room. I reasoned at the time that it was too large to transport to a real location. So we built an entire fake living room set in a big hut (belonging to a friend) in the middle of the woods, complete with a fake window and slide away walls. Simply asking the prop team to ensure the machine could be taken apart and easily transported apparently never occurred to me. I’m such an idiot. But you learn a lot from costly mistakes like that.

Sleep paralysis ...and climate change. During lockdown in 2020 I was writing a short film treatment based on my own unnerving experiences with the former. At the same time I was struggling to find any legitimately interesting (or just not eye-rollingly cheesy and rubbish) angle to explore the latter. Then one day I had a fresh idea which basically incorporates both of them! I’m slowly but surely chipping away at pre-production, it's more of a hobby than a project with a specific deadline at the moment. However, the concept art and storyboards are looking pretty great, I hope I get a chance to make it. The shoot would involve some pretty trippy practical creature effects.

Try to blend in to the background so it comes across as a trendy and fully intentional director’s cameo.

The entire cast of the Sex & The City franchise, and nobody else.

The overly simplistic choice of “Practical or CGI” always annoys me. They both have their place when used correctly, especially when skillfully combined. I’ve taken this answer too seriously haven’t I?

We frequently end up customising found objects or obscure online purchases. I really love the small tactile details that go into props, from haunted teddy bears to a batch of bottles for a fake smoothie brand. If there’s also space to sneak in a geeky easter egg, even better.

It Follows and The Shining.