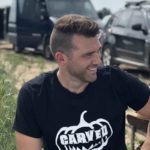 As a multi-award winning Filmmaker and Television Showrunner, Justin Harding has worked as a director on a wide variety of television series and film projects in various genres. His passion for creating monsters earned his horror shorts over 50 awards in film festivals around the world. Justin writes, directs, edits and creates visual effects for his own films.