As writer, producer, director and animator, there is no part of FILTH that does not bear the mark of its creator.

Adam Ciolfi’s lifelong fascination with stop motion animation began in 1975 when at age ten he discovered the work of Ray Harryhausen (The 7th Voyage of Sinbad) In 1977 he attempted his first film with a lump of clay and a Regular 8 camera. By 1985 he and his siblings had produced 26 amateur short films.

Adam completed his first professional production, ATTIC IN THE BLUE in 1991. It would win 4 awards for Best Animated Short during its festival run before being sold for broadcast.

In 1996, after a series of live action shorts, he began work on a stop motion feature film. Working alone in the confines of his basement studio, THE LADY OF NAMES (2011) would take 14 years to complete and would go on to screen at over 60 festivals worldwide, taking home the award for Best Animated Feature 9 times. He followed that up with the multi-award winning and critically acclaimed shorts BROKEN (2014) and HIVE (2016)

FILTH (2019) marks his third short in six years and would prove to be smash hit on the festival circuit. Inspired by the film noir movement of the 1940’s and the classic Universal monsters of the 1930’s, director Adam Ciolfi spent 2 years bringing this dark and violent story to life.

Production began in November 2016 once the finishing touches were put on the script. A full year was devoted to pre-production, designing and building the characters and sets, drawing the over 300 storyboards and recording the vocal performances. Another year would be spent at the animation table, putting the characters through their paces one frame at a time. The epic fight scene that closes the film took 3 months alone to animate. The last shot went before the camera in September 2018. An accelerated post production followed with the film ready to showcase by January 2019.

An extremely successful festival run followed. In its 11 short months on the festival circuit, FILTH would earn 12 major awards and receive a total of 21 nominations.
As FILTH made its way around the globe Adam spent the year in pre-production for his next short film. Animation began on FROM HELL HE RIDES in January 2020. This time his sights are set on the spaghetti westerns of the 1960’s. With a projected completion date of April 2021 FROM HELL HE RIDES continues Adam’s penchant for mashing horror and classic cinema. 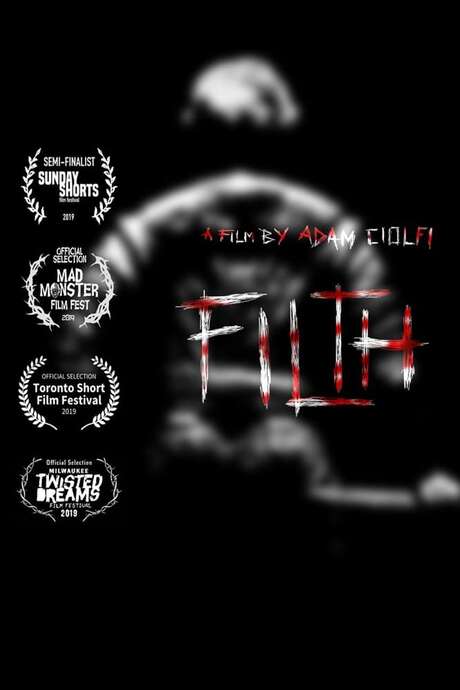 The Frankenstein monster. I’ve always had an affinity for Boris Karloff’s portrayal of the monster. In many ways the main character from FILTH is my interpretation of him ramped up to an extreme level.

I’m not sure it was a bad idea but my initial idea for FILTH had the whole story taking place in a garbage bin. That’s where I first came up with the title and the characters. I really liked the concept but I could never figure out an interesting way to tell that story but I kept at it for several months. The second I abandoned the trash bin concept the whole thing came together. It’s so hard to know what will work until you actually start making it. I’m still holding onto that trash bin idea.

I do but I often feel like the weird uncle no on talks to. Because I work alone and my projects usually take around 2 years to complete I end up spending a lot of time alone, only surfacing when I have a finished project. A few months of screenings then its right back to the basement.

Being that I work in stop motion, every one of my films requires its own unique world building. FILTH was largely inspired by the film noirs of the 1940’s so there are a lot of places to get visual cues, both from the past and the present. Even just walking home at night and looking down an alley. I may not build the alley exactly as it appears in reality but those skids over there are stalked in an interesting way or that graffiti is really intense so I’ll take what I like and leave the rest. My next film is a western so these days I find myself constantly researching, looking at images of old western ghost towns

I would probably die quickly and horribly. The world of FILTH is definitely not one that I could navigate.

I have to go to the classics; The Frankenstein monster, the Mummy, the Wolf Man, Dracula and the Invisible Man.

Lightning round: Freddy or Jason?

How do you go about creating the puppets for your films?

The puppets, depending on their design can be rather complex. I machine all the ball and socket armatures out of metal which is quite an involved process. They are then covered in clay and sculpted to look like whatever it is I have in mind. Molds of the final sculptures are made using plaster and the models are then covered in a foam rubber skin. Lastly they are painted and then finally ready to animate. It usually takes me about 6 weeks to build a puppet from start to finish.

And what about the sets and props?

My sets are basically wood, foam core, styrofoam, balsa, paint, glue, spit and baling wire; very basic materials you can find at any hardware or craft store. Props are usually a little more work. Sometimes I can quickly make things up with dollar store supplies but not always. For my new film I needed a saddle. You’re not going to find a miniature saddle anywhere so in cases like that I have to sculpt the prop, make a mold and cast the finished object in rubber or plastic.

I wouldn’t say that what scares me informs my filmmaking, at least not on a conscience level. The stories I chose to tell often come to me in random fragments and I do my best to organize those disjointed thoughts into a coherent story. Now, why those thoughts come to me in the first place … that’s another matter.

That is such a hard question to answer since I have so many favourites from different eras. Texas Chainsaw Massacre (1974) is up there. I can always watch Alien. I was pleasantly surprised by the Evil Dead remake. I love the inspired lunacy of Evil Dead II and also on the lighter side, What We Do in the Shadows and I was not expecting to enjoy Train to Busan as much as I did. But if I had to choose one film to take to the grave it would probably be John Carpenter’s The Thing.