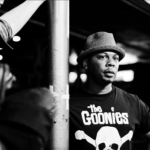 Andre’ Dixon, holds a bachelor’s degree in Digital Design as well as Business Management. He was born in St. Louis, MO., and raised in Chicago, Illinois. By the age of 5, he was already drawing and sketching the world in a detailed manner.

As a teenager, Dixon was known as the go to guy for, painting portraits and illustrating coming books characters. After watching Superman the movie, Close Encounters of the Third Kind and E.T., his interest in the film-making process began. Immediately after H.S. graduation and enrolled at Columbia College of Chicago in the film program, but the cost of education on his own dollar proved too high at the time and he joined the U.S. Navy so he could receive the G.I. Bill to attend college.

After 8 years of honorable service and was discharged and began to pursue his interest in film-making again. The Panasonic DVX100 became available to the public and Andre’ took a chance on pursuing his dream of becoming an Indie filmmaker. He started a company called Inertia Images.

From 2006 to 2008 he directed 3 music videos, produced the short film “Stranger”, directed a Chicago based play The Serpent Woman, and directed two short films The Sullen Girl and Lights and Sirens. It was at this time he began sketching out ideas of a female assassin whose backdrop was set in a futuristic dystopian city known as Technopolis.

Technopolis was shot as a proof of concept with the hope of it being both a television series and feature film franchise.

Film-making is his love and passion and his pursuit of bringing his vision to the masses is one he pursues with heart, dedication and excellence.

THE HAUNTING OF POTTERSFIELD

Father Merrin from the Exorcist. Dudes courage was on an insane level battling a powerful demon from hell that’s possessing an innocent child. Most people would be afraid, but he stood his ground until the very end. That’s admirable.

I don’t know if I’ve had any bad ideas per say, maybe a few I didn’t think would be overall marketable. I try to think of ideas that would make an immediate and long-term impact. My spark comes from trying to stay ahead of the curve and not just settling for an idea just because it came to me. If it’s not something I can fully flesh out I will move on from it.

Yes absolutely. I love everything about horror films. I’ve been a fan since I was a child, and I support my fellow horror filmmaker friends as well as those currently in the industry.

Horror video games! They are one of the best references a horror filmmaker can use. Whether it’s mood, atmosphere, tension or camera angles, everything you need to draw inspiration is there.

Fly like a bat out of hell towards the nearest exit!

Reagan from the Exorcist, Carrie, Michael Myers and Leatherface.

Freddy by far. Stephen King is a damn genius. Practical it did wonders for John Carpenters “The Thing”, Post Apocalypse all day so I can drive around in a suped-up car with my dog and shotgun while looking for gas and water.

I try to do things are cheaply and practical as possible by finding what I want for cheap and modifying it to what I need. As far as sets I try to find them as relatable and dressed as possible to save money.

Well from a horror film perspective the supernatural used to scare me. Now I’d say its horror engrained in realism. Things that can happen in real life that are translated on the screen scare me. I think that’s what makes Michael Myers one of the best horror icons of all-time because anyone could walk around in a mask on Halloween and be a killer and no one would even know it.