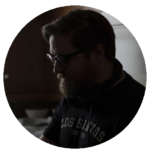 Writer and Director Heath C. Michaels attended the University of North Carolina School of the Arts in Winston-Salem, North Carolina in 1999 and received a BFA in film direction. His first feature film, Yeardley (2010), premiered at the Santa Fe Film Festival where it was nominated for best feature. It also won best feature at the Malibu International Film Festival, best feature and actor at MBIFF, and gained worldwide distribution with DPEC Studios. In 2016, he became a semifinalist in the Academy Nicholl Fellowship, and top five finalist in Final Draft’s Big Break contest, with his feature-length screenplay, Breathe.

In 2018, Michaels wrote & directed the award-winning short, The World Over, which took top prize at the Toronto After Dark Film Festival. In 2019, Michaels optioned a short film script with Fox for their “Bite Size Horror”, and subsequently directed one of his un-optioned pitches, Reflection, in 2020 starring Bianca Bradey from the cult hit Wyrmwood (2014). Reflection is currently enjoying a tour in the international festival circuit.

Oh wow, I suppose maybe Jack Torrance? Sans all the killing your family stuff, but the guy was just trying to write a novel for crying out loud. Writing takes focus, and constant distractions can be quite a bit to take. So, yeah, I can relate to his plight a little—maybe not on a spiritual level, but certainly personal. Every time I watch the scene where Shelley Duvall distracts him while he’s trying to type, and he throws a tantrum, I always smile a little in quiet agreement at that.

Wait, you’re saying I had a good idea? Phew! Finally! But, seriously… I don’t know if this was a bad idea, or a really good one for how bad it was, but one of my first jobs was in a mill where we embroidered socks, and it was very loud with all the machinery, so you couldn’t really chat with each other. I’d bring headphones in and listen to the radio. I’d daydream while this cheesy pop music was blasting in my ears—it was the only station I could pick up. And I remember thinking of a twisted rom com of a guy that gets into a really bad car accident, and the only way they could revive him was using old stereo parts. He had this ridiculously large speaker in his chest. And, in the most melodramatic fashion, the only way he could communicate with his love interest was through song lyrics that’d play from his chest speaker that’d sum up how he felt at the moment. It was pretty bad, but I’m not gonna lie, I’d probably like to watch that one.

No. I’ve met wonderful filmmakers and horror fanatics on the festival trail, but I don’t find I fit in easily when they geek out on horror films. I don’t think what I make fits neatly into the typical mold of horror films either, and maybe that’s part of it. I’ve a funny story that goes along with not fitting in there. I was in South Korea for their huge horror fest in Bucheon, and this nice lady came over to my wife and me and said hi. We politely engaged in trivial small talk, and there was this look in her eyes like she’s used to being recognized at these events. We had no idea who she was, and that was very obvious to her. She eventually moved on and that was that. Well, that lady was none other than horror icon Barbara Crampton. That was a little embarrassing.

Honestly, philosophy and psychology. I’m a huge fan of many existentialists, Freud’s work on the uncanny, and so on, which all lends itself beautifully to buttressing story and character. You don’t want your story to just be plot, or “what is my character’s arc”, you want it to reflect some kind of human truth. Something we recognize in ourselves. Or something we wish to explore subconsciously. There are loads of smarter people than me that’ve already invested their lives deconstructing the human psyche, so I don’t want to redesign the wheel when I can borrow from their thoughtful work and try my best to elevate my art from it.

Move out of that damn house.

At the top of that list would be Freddy Krueger. How could you really stop someone that could kill you in your dreams with hand knives? The very last on my list would be Chucky. I can’t have a two-foot-tall stuffed doll on my squad that could be kicked across the room.

Freddy. Stephen King. Practical, though I’m not a snob about this. CGI has its place. But I worked in physical special effects for this sci-fi film called Last Lives with C. Thomas Howell back in the day. I was interning, but I made props, squibs, blew up cars, etc. There’s nothing quite like it, so I’m a little partial to practical effects. And… Pre-apocalypse.

Our Production Designer on The World Over, Emily Peters, did build a prop door frame, which she made swappable, so we could have different states of the keyhole as it’s discovered throughout the story. And because of the nature of films being shot out of order, this was necessary. The real trick was getting the key to turn and stick inside. It’s not as easy as buying a lock cylinder, because the prop frame was built to be as flat as possible against the real frame. It wouldn’t fit. So, Emily and my wife, who was also the producer, worked together on this solution to use one of those Mr. Clean Magic Eraser sponge things behind the keyhole so it would conform around the key and hold it in place. Very low tech, but very effective.

Honestly? Creating thoughtful art that’s easily dismissed and becomes lost in the noise of constant content creation these days scares me. It does. On one hand, the democratization of content is great, but on the other, it’s hard to make something like The World Over, which takes so much time and care—and money!—because it could easily get lost in the noise as people are posting content daily by the tens of thousands. It’s hard to stand out, and that’s scary to me. I don’t have the kind of spare income to fund these quality shorts nonstop, nor do I have a strong marketing muscle I can lean into. Yeah, so that’s definitely scary. Maybe that says something about a fear of irrelevancy, I don’t know, or the fear of a changing industry with changing interests, but it’s scary because it fills me with uncertainty about the future of art and of artists like myself. Thankfully places like ALTER exist for us.

My favorite horror of all time is The Shining. Though I never saw it as scary so much as it makes me uneasy, which is far better in my opinion. I also love how Kubrick crafts most scenes and performances, they’re very hypnotic, so that’s a no-brainer for me. But as far as “scary” films, I was a little spooked by the first Insidious movie when they went into the red world or whatever that was. Audition is up there, too.