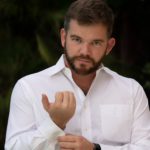 As a child, Matthew Lynn would talk into his tape recorder and tell the stories of space battles and magic castles. For his entire life, Matt’s focus has been on creating worlds that inspire the imagination. Through film he learned that this gift can not only bring his ideas to life but change the world and people around him.

It is this unique perspective that inspired him to create the production company Bridge the Divide Media to tell LGBT stories on a larger scale. His work has been accepted into Cannes, Tribeca, Frameline, Outfest and more while also receiving both Gotham and Queerty award nominations. After attending the American Film Institute Conservatory’s MFA program, Matthew traveled around the world creating and producing projects including feature and short films, documentaries, music videos, series, national commercials and has created original shows for Himeros.TV, Dekkoo, and served as the cinematographer for Brian Jordan Alvarez from Will and Grace. His ability to lead a team while bringing a unique perspective makes Matthew Lynn a gay filmmaker to watch out for.

THE THINGS WE DO WHEN WE'RE ALONE