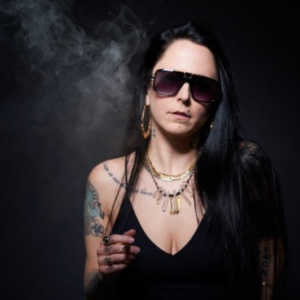 Jill is a director, producer, writer, and hairstylist from Kansas City, Missouri. She has made several horror shorts, most notably THE STYLIST (2016), which played at countless festivals worldwide and won 20 awards, including the Jury Award and Audience Choice at Etheria Film Night and Best Performance in a Short (Najarra Townsend) at Fantastic Fest and Monster Fest. The short is the basis of her recently completed first feature, also called THE STYLIST, which premiered on Arrow Video in 2020.

Leatherface. Infact, he was my initial inspiration for the character “Claire” in my short film The Stylist.

Hell yes. My introduction to it was almost 7 years ago at the Texas Frightmare Weekend convention. I was hooked and inspired. I wanted more of it. So, I came home and started a monthly screening series here in Kansas City, MO for independent horror films – that I still run today. Through programming that, I met tons of filmmakers. That is what truly inspired me, gave me the guts, to direct my own film. I never considered it before. But through conversing with filmmakers and seeing so many independently made films, I realized they were just regular people who decided to do it and did! So, maybe I could to!? Since 2012, I’ve attended countless horror conventions and film festivals. I love nothing more than to reunite with the horror family. It’s like never-ending summer camp when we’re together. I often arrive alone, but I know I won’t be alone once I get there.

It’s case by case, of course, but first I often make a list of films that relates to the film we are making in someway. It could be the same type of story, or a similar look, or as simple as a similar feeling. Music is another great place to draw inspiration. I try to think of what music feels like the world we are in.. or the moment we are in. Or, what music a certain character would listen to, to help understand who they are, how they may decorate their place, how they may dress. In relation – I’ll also make lists of other films with similar characters.

Oh lord, where do I start? Ok, right after we made Call Girl. Eric Havens (writer of Call Girl) and I wrote a little script that we realized was just too much like Call Girl. It was, again, ultimately about a woman who we start off assuming is the victim– and TWIST, it turns out she is the villain. Just. Like. Call Girl. Looking back, I know it was all an excuse to write something with a torture scene (I like torture, sue me!). I’m not sure how you get past bad ideas. But they way I know if an idea/story means enough to me is how obsessed I become with it. If I can’t be obsessed with it, it’s not going to work.

Which one? The Stylist is already so much like my real life. I’ve been a hairstylist for almost 15 years and that’s where the idea came from. No, I do not want to scalp my clients. But I do have the prop wigs/scalps hanging from wig heads in my home! HAHA! If I woke up in Call Girl, I would feel safe knowing Mitzy was out there “taking care” of the bad men. I would be terrified if I woke up inside 42 Counts and that’s what inspired me to make that film. Being somewhat close to the real story, I constantly thought about how scary that would be. And how would you move on? Do you ever?

Leatherface, May, Candyman, Frank Zito (Maniac), Lola (The Loved Ones), American Mary, The Girl (A Girl Who Walks Home Alone at Night)

I do not do this myself. I have had a large hand in set decorating and design, but I am no builder. I have worked with amazing people, including production designer Cory Hinesley. She built and designed the basement scene set from nothing in 42 Counts. She built the desk and shelves custom for the room. It typically goes like this: I provided her with reference photos of stuff I liked, we also talk through the characters- to give her insight as to what they’d have around, how they’d decorate, etc – and like magic, she makes my wildest dreams come true. I think a film is made in it’s tiny details. Things that wash over you, but add so much. If you can you should go the extra length to make it real. For instance, in 42 Counts, in the basement scene, the characters discover a computer with multiple “live” video feeds coming from their apartment. We went far to create that. We filmed each feed (7) in preproduction. We had my dog walk around in a couple of the feeds, to make it look live, to add some action. And one of our crew members (not sure what to call this honestly) created a master video, out of all 7 of videos, for the computer within the scene, so it would play perfectly when the characters discovered it.